People Democratic Party has said that there is no basis for All Progressives Congress to compare President Mohammodu Buhari administration with Obasanjo/Atiku tenure.

In a release signed by the PDP National Publicity Secretary Kola Ologbondiyan stated that the party attention has been drawn to a knee-jerk reaction by the dysfunctional All Progressives Congress (APC) to the well-received suggestions by former Vice President and PDP’s candidate in the 2019 Presidential election, Alhaji Atiku Abubakar, on how to revamp our ailing economy.

While the PDP had chosen not to allow the fizzling APC to distract us from our focus, particularly in finding solutions for the COVID-19 pandemic, we cannot keep quiet and allow those who had reversed all our national gains in a space of five years, to continue to engage in distortions, outright lies and appropriation of projects executed by the PDP to continually spit on the memories of Nigerians.

It is sad that a patriotic and non-partisan rescue effort by Atiku Abubakar was met with insults, animus and aspersions by an administration under which Nigeria is collapsing economically, just because it lacks the required competence and brilliance for modern governance.

This is a government under which our nation has become the poverty capital of the world; our foreign debts have quintupled from $7 billion in 2015 to $30 billion today; our once highly rated banking sector is now shedding its workforce; our service sector has collapsed, with the health sector now begging Elon Musk for medical supplies on Twitter.

This is an administration under which our currency is listed as the fourth worst performing currency on earth, and has been devalued 112% from its 2015 value; a government that is now footing its basic bills via foreign borrowings with corruption festering so much that our agencies had literally become Automated Teller Machine (ATM) for its officials and cabals.

It indeed speaks volumes that the same day that the Times of London carried a headline ‘Nigeria’s President Buhari Appoints Dead Man to Run Government Agency’, was the day the APC had the gall to accuse former Vice President Atiku Abubakar of being a part of an administration that achieved little. It is sad that the APC would take this route.

The PDP gladly accepts the challenge by the APC to list a few of the many achievements of the Obasanjo-Atiku administration. In doing this, we also counter challenge the APC to name three projects initiated, started, and completed by the Buhari administration in its almost five years of governance.

Just to mention a few; it is on record that the Obasanjo/Atiku-led PDP administration:

*Achieved the historical debt relief (of about $18 billion, an overall discount of about 60 percent from $30 billion), which freed Nigeria from the suffocating shackles of huge and reckless external borrowings accumulated in the past.

Reduced our budget deficits by 72%, stabilised the Naira at ₦88 to $1 and left savings at an all time high of $67.5 billion in the Excess Crude Account and foreign reserves, whereas it inherited a reserve of less than $2 billion.

Created and implemented the National Economic Empowerment Development Strategy (NEEDS) which stabilized the economy and led to the doubling of our GDP within four years from $55.65bn in 2003 to $114.36bn in 2006, as acknowledged by IMF database.

Improved Foreign Direct Investment (FDI) inflow from less than $700 million per annum in 1999, to $4.3 billion by 2007, which earned Nigeria a BB credit rating by Fitch.

Introduced the GSM revolution that saw teledensity in Nigeria increase from 500,000 lines to 60 million lines by May 29, 2007.

Established our anti-corruption laws and created the EFCC and ICPC, both anti corruption bodies that Nigeria depends on to fight corruption.

Increased agricultural output to become a commercial exporter of cassava to China in 2003; with our non-oil sector growing by 32% from 1999 figures, leading to strengthening of citizens’ purchasing power and increased revenue from taxes by 42%.

Reformed our health sector via the introduction of the National Health Insurance Scheme and the NHIS Act of 2004 in addition to reinvigorating drug control via NAFDAC under Dora Akinyuli.

Improved Access to Education by 32% via the Education Trust Fund in 2003 (now known as TETFund) as well as expanded our power production capacity with the establishment of new power plants.

Created the grand road map to revitalize the railways. The railway network, which, the APC boasted was commissioned by the Buhari administration, was revamped and reconstructed by the PDP administration.

The PDP challenges the APC to name just three projects initiated, started and completed by the Buhari administration while the nation awaits our further list of achievements at the right time.

END_OF_DOCUMENT_TOKEN_TO_BE_REPLACED 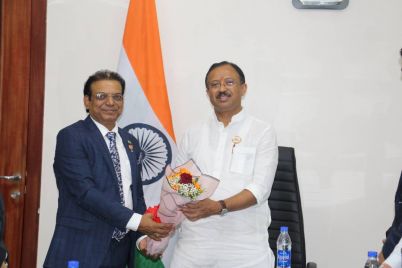 Shri Muraleedharan, Indian Minister of state for External Affairs and Parliamentary Affairs has advised Indians in Nigeria on peaceful co-existeance…

As the nation prepares for 2023 general elections, serious crisis is looming in the Peoples Democratic Party, (PDP) This is…