Members of the National Assembly comprising lawmakers from both Chambers from Plateau state has presented a cash donation to the state government towards the fight against COVID-19 pandemic.

The delegation which was led by the Deputy Speaker of the House of Representatives, Rt Hon Ahmed Idris Wase donated an undisclosed sum of money to the Plateau State COVID-19 Trust Fund so as to assist Government deal with the pandemic.

The Deputy Speaker said the donation was in appreciation of the measures taken by the State Government so far in dealing with the pandemic through several measures.

He said “We have noted with delight some of the major steps you have taken to curtail the disease especially by restricting movements which has done a lot to limit the spread of the pandemic.

“We have seen you deploy technology in the borders to enforce the movement of people which largely limited importation of the disease”.

The lawmakers asked the Governor to continue his initiatives which are aimed at saving the lives of the people and making sure Corona virus is defeated in Plateau State.

Receiving the donation, Governor Simon Lalong who expressed appreciation for the gesture of the National Assembly Plateau Caucus said the donation again shows their patriotism and unity towards the progress of Plateau State.

Lalong said “Your presence here is a show of unity and solidarity for the good of our people. I have keenly followed what you have been doing individually for your constituents and other vulnerable people in the State. Nevertheless, you have deemed it necessary to contribute to the State COVID-19 Trust Fund. We are very grateful”.

He used the opportunity to also commend them for putting the interest of Plateau State high on the agenda of the National Assembly which has attracted a lot of goodwill from the Federal Government to the State. He also appreciated them for supporting President Muhammadu Buhari by passing quality legislations for the development of the country.

END_OF_DOCUMENT_TOKEN_TO_BE_REPLACED 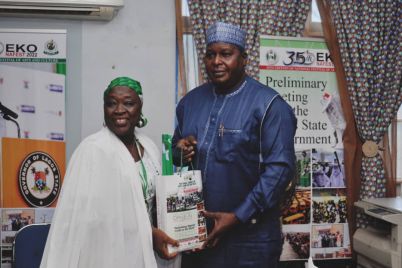 Head of Service Orders Resumption of Level 14 and Above Officers

The Head of Service (HOS) of the Federation, Dr Folasade Yemi -Esan has directed officers on Grade Level 14 and…