The National Working Committee (NWC) of the All Progressives Congress (APC) warns against factionalization of the party in Cross River State.

In a release signed by Mallam Lanre Issa-Onilu National Publicity Secretary All Progressives Congress (APC) warned those parading themselves as factional Party executives in Cross River State to desist or face legal charges for impersonation.

The APC NWC affirms the Cross River State Executive led by the late Chairman, Dr. Mathew Achigbe who died in a ghastly car crash in November 2018. Achigbe was succeeded by his then Deputy, Sir John Ochala, who has been holding the position in acting capacity.

The Party’s position is affirmed by a Court of Appeal judgement delivered on 23rd April, 2020, which recognises the Sir John Ochala-led Cross River State Executive as authentic and legitimate.

It would be recalled that through Court Of Appeal Judgement Affirmed Sir John Ochala-Led APC Cross River State Executive in a unanimous judgment delivered by Justices Emmanuel Akomaye Agim, Adamu Jauro and Peter Olabisi Ige, the Court of Appeal affirmed the Sir John Ochala-led All Progressives Congress (APC) Cross River State Executive as the authentic and recognised executive in the state.

The Appeal Court also nullified an earlier ruling by an Abuja High Court for lacking territorial jurisdiction to entertain the suit brought by a supposed factional APC executive in Cross River State.

In affirming the APC National Working Committee (NWC) authority over the election of party executives, the Appeal Court equally affirmed that election of members of a political party by ward, local government area and state congresses to offices in the respective chapters of the party in a state is an internal affair of that party – a position affirmed by the Supreme Court in several previous judgements.

“The general law is that a political party, being a voluntary organisation or association, disputes over its internal affairs are non justiciable and a court has no jurisdiction to entertain them” the 23rd April, 2020 judgement (CA/A/19/2019) read.

Recall that the APC NWC nullified the 19th May, 2018 Cross River state congress and the purported election of the executives from that congress.

The Appeal Court ruled that the Abuja High Court had no territorial and subject matter jurisdiction to adjudicate and decide issues concerning a State Congress of the All Progressives Congress and election of executives of the Cross River State Chapter of the APC that held in Cross River State.

“Therefore, its exercise of jurisdiction to hear and determine the suit and the proceedings therein and the judgement delivered by it are a nullity.

“On the whole, this appeal succeeds as it has merit. It is accordingly allowed. The entire proceedings and judgement of the High Court of the FCT at Bwari, Abuja in FCT/HC/BW/CV/106/2018 delivered on 13-12-2018 by O.A Musa J, are set aside.

“The respondents shall pay costs of N400, 000 to the appellant.” The Appeal Court judgement read.

END_OF_DOCUMENT_TOKEN_TO_BE_REPLACED 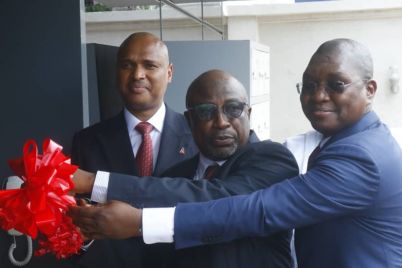 TAJBank Ltd, one of Nigeria’s leading non-interest bank, has continued financial inclusion drive with the opening of a new, technology-powered…