Four of the five suspects standing trial for the alleged murder of Sunday Joshua, a security guard at the New Trafford Hotels and Suites in Bauchi, have tested positive for COVID-19..

The arraignment of the five accused which include the Managing Director of the hotel, Innocent Ejeh, at the Chief Magistrate Court 7, Yelwa, yesterday, was stalled following a letter written to the court that four accused persons, Abdul-Rasheed Shuaibu, Jacob Joshua, Joshua Ibrahim and Timothy Yunusa, have tested positive for the disease.

Reading the letter from the Bauchi Correctional Centre dated June 11th, 2020,the trial Magistrate, Safiya Salihu, said that the four accused were confirmed positive for coronavirus by the National Center for Disease Control in Bauchi State.

According to the First Information Report (FIR) presented before the Court, the case is between the Commissioner of Police versus Innocent Ejeh and four others who are standing trial for criminal conspiracy and culpable homicide in accordance with sections 96 and 221 of the Penal Code laws.

When the case was called, the Prosecution Police Officer, Sergeant Ayuba told the court that the accused persons could not be in court due to the reasons stated in the letter from the Correctional center in Bauchi and pleaded for an adjustment.

He further told the court that during the sitting of the court on 5th and 8th of June, the accused persons were ordered to be remanded in Correctional Centre custody.

The trial Chief Judge who read the letter from the Bauchi Correctional Center which was dated 11th June, 2020, adjourned the case to 14th of July, 2020, for further mentioning and arraignment.

There was a mild drama in the court room when the presiding Chief Magistrate refused to recognize the appearance of a Counsel from the National Human Rights Commission (NHRC) for improper dressing chiding him for not setting example as a learned person.

Though he apologized for not properly dressed before the court due to what he described as misinformation about the case, Chief Magistrate gave him the option to either enter his appearance with a comment or not recognize his presence, he chose the latter with apologies but the court did not record his appearance.

It will be recalled that on May 25th, 2020, late Sunday Joshua who was a security guard at the New Trafford Hotel and Suites, Gwallameji, Bauchi was accused of stealing a mobile phone an allegation he denied but in the process of trying to extract confession from him, he was allegedly tortured by some of his colleagues which led to his death. END

END_OF_DOCUMENT_TOKEN_TO_BE_REPLACED 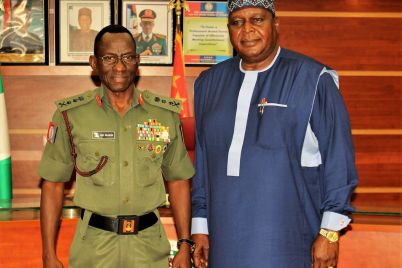 YOU ARE A PROVEN AMBASSADOR OF OUR CULTURAL HERITAGE”. – GEN. IRABOR, CDS, HAILS RUNSEWE

“ The Chief of Defence Staff, General Leo Irabor has described the Director General, National Council for Arts and Culture,…

Segun Babatunde in Bauchi The Federation of Muslim Women Association in Nigeria FOWMAN, Bauchi State Chapter has called on the…