The Federal Government has called for a robust synergy with State Governments and other critical Stakeholders in cushioning the effect of COVID -19 Pandemic on Food Security.

The essence of government action was to ensure food security, economic growth, job creation and prevent food scarcity in the Country.

The Minister of State for Agriculture and Rural Development, Mustapha Baba Shehuri, stated this during the flag off Ceremony of the distribution of free agricultural inputs to farmers as part of the mitigation measures against the Pandemic.

The event was held at the Ministry’s Zonal office, Moore Plantation, Apata – Ibaban, in Oyo State.

Shehuri noted that a number of countries have banned or drastically reduced food exports to avoid scarcity of food.

“With dwindling oil revenues and limited opportunity to import food from other countries, one would only wonder what Nigeria would have been experiencing today, in terms of food supply, if this Administration had not taken the right policy steps and remained focused and steadfast in investing in agriculture”.

The Minister emphasized that the Ministry is supporting breeder and foundation seeds production and linking up with the private seed companies to make certified seeds available to farmers for excellent yield.

He pointed out that “since smallholders are the most vulnerable, it become imperative for the government to support them with the much-needed inputs especially seeds, which is the most important factor that influences farmers’ yield in order to enable them to recover quickly from the set back of the Pandemic’’.

Baba Shehuri informed that ‘’the distribution of agricultural inputs to smallholder farmers which include different categories of seeds of Kenaf, yam and cocoa seedlings is part of the Ministry’s intervention to reduce the effect of COVID-19 pandemic on agricultural production in Nigeria and avert food scarcity in 2021’’.

He also said that ‘’through this effort and other complementary interventions by different stakeholders, the government hopes to increase the resilience of farmers and the national food systems in general’’.

The Minister added that the yam farmers through their national association and other cooperative groups are being supported with about 12 MT of foundation seed for production of certified seeds’’.

He explained that ‘’the Ministry is also distributing over 18,000kg of organic insecticide to combat army worm infestation in maize.

“We are also distributing 66,000 cocoa seedlings to farmers nationwide. These seeds are being given to farmers free of charge while other inputs are given at 75% subsidy’’.

He emphasized that the Ministry is supporting breeder and foundation seeds production and linking up with the private seed companies to make certified seeds available to farmers.

his remarks, the Governor of Oyo State, Seyi Makinde, represented by the Secretary of the State Government, Olubamiwo Adeosun, said the countries that have successfully managed their own agricultural transformation have incorporated the following processes modernizing business , strengthening the links between process, production and market.

The Governor, added that “they have also adopted innovative and modern technology to ensure data- driven process that is empirically documented and evidence driven”,.

He appreciated the Federal Government for being proactive toward ensuring that Nigeria averted food scarcity in 2021.

END_OF_DOCUMENT_TOKEN_TO_BE_REPLACED

The Minority Caucus in the House of Representatives condemns the unabating killing of Nigerians, particularly the youths, the latest being… 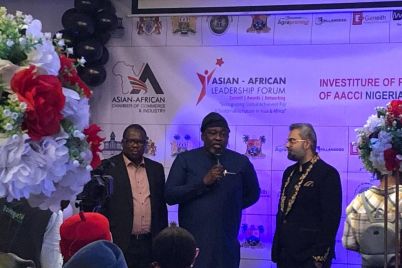 Gov. Babajide Sanwo-Olu of Lagos State on Saturday bagged a leadership award in infrastructural development, conferred on him by the…