Governor of Rivers State, Barrister Nyesom Ezenwo today pleaded with the Emir of Bauchi, Dr Rilwanu Suleimanu Adamu not to hesitate in assisting state governor to be on the right track especially observations geared towards performing better.

Governor Wike made the request when he paid a courtesy visit to the Emir at his palace accompanied by Governor Bala Mohammed.

“Your Royal Highness, today I am in Bauchi because of my respect to my friend and very respected colleague, the Bauchi State Governor. For me as a person, today is my second term for coming to Bauchi.”

“Bauchi Emir is one of the respected traditional rulers in the country and please don’t hesitate to call us to order, because we the politicians, we have so much pressure on us. I plead with you to assist the governor to be on the right track.”

“For you to be my friend, it is a very very difficult, but Senator Bala has done so well to me and I want on behalf of Government and people of Rivers to say that, we are happy to associate with the Bauchi Governor.

Governor Wike used the medium to thank members of the Bauchi State House of Assembly for supporting Governor Bala Mohammed for the benefit and wellbeing of the people of the state.

“Mr Speaker, and other members of the Bauchi State House of Assembly, I must commend you for supporting your Governor despite being in the opposition, but you decided to remained supportive to the governor for the interest of Bauchi people.”

Also speaking, Governor Bala Mohammed described Governor Wike as one of the best performing Governors especially in deepening stakeholding and working for the interest of his people.

The Governor told the Emir that, the Rivers State Governor is one of the persons making history in Nigeria in the areas of developing and building bridges and other needed projects.

“Your Royal Highness, we are always happy to be with you because of your pleasant personality and for what this place stands for. Today history is made, one of the persons that is making history, developing Nigeria and Building bridges is in your domain.”

“Governor Wike not because he is my friend, but I want to tell you that, he is a generous man and highly principled and passionate, somebody who believes in the corporate existence of Nigeria.”

He said with his relationship with the visiting Governor, he has learned so much from him especially in coming up with projects that will impact positively on the lives of the people.

“Barrister Wike has personally helped me in my life as a friends, we have worked in the cabinet of former President Jonathan and now he is my senior in the Governors forum.”

On his part, the Emir of Bauchi, Dr Rilwanu Suleimanu Adamu reassured of the support of his council to the state government in order to succeed in the delivery of the dividends of democracy.

The Emir expressed appreciation for the good relationship existed between the two governors and acknowledged their contributions towards the growth and development of the country. END

END_OF_DOCUMENT_TOKEN_TO_BE_REPLACED

…Pledge Continued Loyalty, Support to his Administration From Segun Babatunde in Gombe Traditional rulers in Funakaye, Nafada and Dukku Emirates… 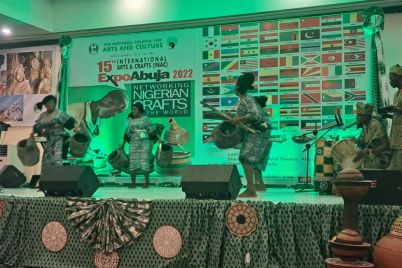 15th edition of International Arts and Crafts Expo in pictures.