The Deputy Speaker of the House of Representatives, Rt. Hon. Ahmed Idris Wase has said the House would consider the creation of states, state police, true federalism, local government and judicial autonomy in the review of the 1999 constitution.

Wase, who is the chairman of the House Special Ad hoc committee on the review of the 1999 constitution disclosed this yesterday at the inauguration of the committee at the National Assembly.

The Deputy Speaker noted that “There has been several attempts to amend the 1999 Constitution, yet the agitations for a much more fundamental amendment has not stopped.

“This is because there are very critical aspects of our Constitution that touch on our continued existence as a strong, indivisible Nation. Until these critical areas are resolved, we may continue to face clamor for a new Constitution.

“Therefore, in order to achieve the much needed success by the 9th Assembly, there are pertinent areas that must be looked into. These are burning issues that have been left to burn for so long without giving them the much needed attention”.

He said, already over 15 constitution alteration bills have been referred to the committee touching on these broad thematic areas.

Wase observed that “Despite the fact that Nigeria prides herself as a ‘federal state’, it is sadly evident that it is far from what federalism entails.

“Some have stated that our federal system is more unitary than federalist especially with the number of items on the exclusive legislative list where the federal government regulates even simple items like primary education and agriculture. Hence, there has been clamour for more devolution of powers from the centre to the states in order to makes states more viable and economically sustainable”

“Arguably, the framers of the 1999 Constitution, created a worrisome situation by giving validity to the existence of 3.162 (6), which prescribes the “State and local govemment joint account”.

On state police, the deputy speaker said “While internal security is of paramount importance, the concentration of the power of the police at the central government has created several policing challenges at the states.

“While some have advocated for the creation of state police, others have expressed worry on the possible abuse of such power by state governors.

“However, one thing that is clear is the need for us to take a second look at our internal security superstructure in order to make it work for our people and protect their lives and properties”.

Speaking on the agitation for state creation, he stated that “It is pertinent to note that the current 36 states of our federation were created via military decrees. Hence the true wishes and aspirations of the people were never considered in such creations.

“There is need, therefore to examine the subject of state creation (and the associated constitutional rigours and difficulties surrounding it) in such manner as to reflect the wishes and aspirations of homogenous people in a democratic system”.

The ad hoc committee chairman noted that “The 1999 Constitution of the Federal Repubtic of Nigeria (as amended) guarantees the independence of the judiciary in the country including state courts.

“Unfortunately, state courts (judiciary) in Nigeria and of course legislatures have over the years relied on the executive for their funding. This is clearly antithetical to the principle of separation of powers as guaranteed under the constitution”, he stated.

END_OF_DOCUMENT_TOKEN_TO_BE_REPLACED 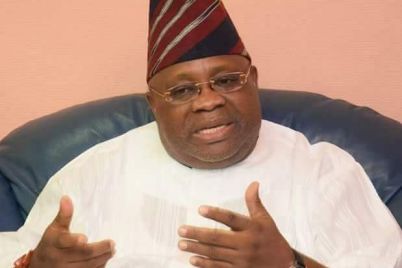