The Member representing Obokun/ Oriade Federal Constituency of Osun State, Rep. Busayo Wole Oke has Commesurates with the Governor of Oyo State, Engr. Seyi Makinde over the death of his mother, Chiefs (Mrs) Abigail Makinde who passed on on Thursday .

Hon Oke who said that he received the news with great shock urged Gov Makinde and the entire bereaved family
to ake solace in the good deeds of Mama, which would remain indelible on the sands of time.

According to him, “my heart goes to Governor Makinde and the entire tfamily, on the sudden departure of Mama, who did not show any sign of sickness until she peacefully departed this world, May Mama’s soul rest peacefully with the Lord.

The Peoples Democratic Party, PDP, law maker also pointed out that he was happy that Governor Makinde assumed office at a Youthful age while Mama was still alive

He urged Gov Makinde not to allow the death of his mother to slow down the various developmental programmes being executed for the people of the state by his administration, as Mama had only gone to rest in the Lord her creator.

END_OF_DOCUMENT_TOKEN_TO_BE_REPLACED 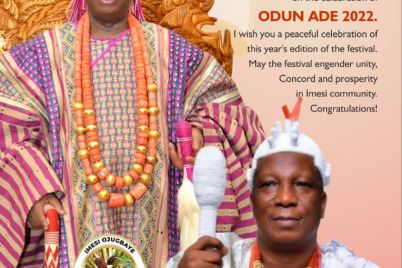