The Speaker of the House of Representatives Rep. Femi Gbajabiamila on Tuesday rolled out more action plans of the Green Chamber for wholesale reforms of the Nigerian Police Force (NPF).

The Speaker, in an address at the commencement of Tuesday’s plenary, said two weeks from now, the House will receive and immediately begin to consider legislation that seeks to establish a system of independent, responsive accountability in the police.

He said the system would hold erring members of the Police Force to account for their conduct in the performance of their duties and impose civil and criminal liability for violations of the law and the Police regulations.

Additionally, he said, it would ensure that officers who engage in unauthorised, unlawful use of force are expelled from office and subject to the full penalty of the law as well as prohibit, with severe penalties, the practice of using illegal incarceration as a cudgel to extort law-abiding citizens of their hard-earned resources.

He also declared that he would not sign off the 2021 budget without adequate provision for the compensation of the victims, the welfare of police officers and ASUU.

“As we endeavour to hold our nation’s police to higher standards of personal and professional conduct, we must also make sure that we provide for the welfare of the men and women to whom we assign such significant responsibilities in our collective interest,” Gbajabiamila said.

In achieving the above, the Speaker noted, the House is already collaborating with the Nigeria Bar Association (NBA) and the National Human Rights Commission (NHRC).

Gbajabiamila also announced that in the next one week, he, along with some members of the House, would visit the families of those that lost their lives to SARS brutality.

He also declared that he would not sign off the 2021 budget without adequate provision for the compensation of the victims, the welfare of police officers and ASUU.

“As Speaker of this House of Representatives, let me say now for the records to reflect, and in the expectation that I would be held to account: I will not sign off on a 2021 Budget that does not include adequate provisions to compensate those who have suffered violence and brutality at the hands of the police in Nigeria in the last two decades.

“I will not sign off on a budget that does not include provisions to fund improvements in police training and welfare.

“I will not sign off on a budget that does not meet the reasonable demands of the ASUU, to which Government has already acceded. There is no better time to rethink the system of funding for higher education in Nigeria. The current system does a great disservice to our children and our country, and we must commit to changing it so that we can free our institutions of higher learning to be citadels where innovation thrives, and excellence is a given.

“With my colleagues in the House of Representatives, I will visit over the next week, some of the families of those who have lost loved ones to police brutality and when we come back, we will work together to honour the memory of those we have lost.

“The House of Representatives will pass an Electoral Reform Bill in time for the next general elections so that we may continue to improve the process of electing our political representatives at all levels.

“I will support the amendment of the constitution to ensure that the provisions on fundamental human rights have teeth, resource control is dealt with equitably and that the next generation of Nigerians does not inherit evident dysfunctions of our current system.”

He also called on the protesting youth to tarry a while and give the government the opportunity to attend to their demands.

“​To the young people across Nigeria who have led these protests, whose call for change has brought about this historical moment, you are the midwives of national rebirth. You have moved a nation to action, and now you must join in doing the hard work of making real the vision of a more just, more prosperous, and more resilient nation.

“​We see your true cause. Please do not allow your righteous cause to be hijacked by those with base motives, who see in this moment an opportunity to pursue vendettas, to spread division, exploit the many existing fissures that exist in our society and bring our nation to its knees.

“You have raised your voices and marched to demand a better Nigeria. From Abuja to Washington, to Calgary and London, your voices have been heard. Do not allow anybody to convince you that to withdraw from the streets now is to concede defeat.

“This is the time to move your agitation from the chaos of the streets to the painstaking deliberations and strategic partnerships that birth policy and produce legislation. It is time to mobilise your voices in support of specific policy interventions that will deliver on our shared objectives of national renewal and a country that reflects the best of us. I thank you, your country thanks you, and history will be kind to you.”

END_OF_DOCUMENT_TOKEN_TO_BE_REPLACED 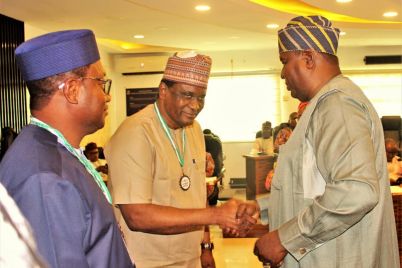 Director General, National Council for Arts and Culture, Otunba Segun Runsewe played the Bishop at an expanded meeting of multi…