The House of Representatives Committee on Federal Road Safety Corps, FRSC on Monday debunked some reports that it asked officers and personnel of the agency to start bearing firearms.

Hon. Akinfolarin Mayowu while addressing journalists in the National Assembly explained that was necessary to make the clarification following the controversies and the backlashes that had trailed the reports

He explained that what transpired at a meeting with the Corps Marshall and Chief Executive Officer, Boboye Oyeyemi during a budget defence session last week was the resolution that a special committee be set up to x-ray a barrage of complaints of killings, harassments and molestations of FRSC officers and propose amendments to the 2007 Act where necessary.

Mayowu said that the resolution was, however, an offshoot of a heart-rending assault report on the FRSC personnel nationwide by the chief executive officer.

Quoting section 19 of the Act, the Chairman said that though there is a provisional leeway to protect the officers exposed to danger, at no time was a specific request and approval sought and given for firearms bearing.

Referring to it as a matter of concern to all Nigerians, Mayowu said it was necessary to set up committee to make input and suggest a way out of the quagmire even as he added that it was not feasible to buy firearms, going by the economic situation of the country at the moment.

He said: “I want to start by debunking some insinuations made across social media. We were with the Federal Road Safety Commission for budget defense, and in that meeting, it was clearly stated that as responsive representatives that we owe it a duty to protect lives and properties on our roads and the marshal made some reports concerning the harassment, molestations, killings of his Corp officers and we responded as a committee, a committee that’s very responsive and sensitive to the plight of Nigerians.

“We made it clear that we owe it a duty to ensure safety on our roads. The road safety people and roads users are all Nigerians and it’s our responsibility. It’s an issue of two sides to a coin and the personnel of the road safety must be protected and we made it clear in that meeting that safety on our roads, is a collective responsibility including all of you here seated.

“We made reference to existing law, the road safety establishment act of 2007, and there was section 19 made it very clear that those on essential duties, those exposed risks to be protected by way of giving arms to them where possible.

“We said a committee should be set up. We’re not saying road safety should carry arm or not. What we’re saying is if you have a law, what should be done is to call for amendment.

“Once you have that amendment, there will be public hearing. At the hearing, the people will be able to make their contributions where necessary. We said as a committee we need to form a body that will liaise with this commission, SGF supervisory body so that we can come together, brainstorm and see what can be done so that unnecessarily we don’t lose our men to hoodlums.

“In 2007, we had about 162 cases where men of road safety were attacked, kidnapped and sometimes killed. Recently on 13th of September, some personnel of road safety were kidnapped in Kebbi state. As a matter of fact, the Committee took it upon itself to liaise with all the necessary security apparatus.

“Initially, we showed a lot of constraints not to respond but the way the whole thing is going, we strongly believe that as the direct representative of the people, we owe Nigerians our explanation. Even now can anybody suggest we should buy guns where we don’t even have the money to fund our projects? On yearly basis we make budget but at the end of the day, half of this money cannot fund the projects.

“We now said let us sit down and see what can be done to protect our people, road safety people are Nigerians, our concern is safety on the road and protection of lives and property. There was never anywhere in that meeting where we stated that compulsorily road safety officials will carry arms, rather we made it clear that that law should be looked into. Laws are made to obeyed, amended, discarded. So where necessary we have to sit down, including yourself to make an input. This is an important issue.”

END_OF_DOCUMENT_TOKEN_TO_BE_REPLACED

Why I Left PDP For APC, Says Dogara

Former Speaker of the House of Representatives, Mr Yakubu Dogara in the 8th Assembly shield light onhas why he left… 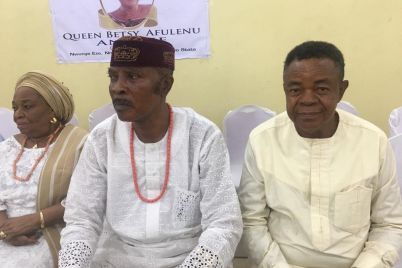 From Bola Ogunlayi, Ibadan. The Eze Ndigbo of Ibadanland,Dr.Alex Anozie has enjoined Nigerians of all extractions to be matured in…