The Speaker of the House of Representatives, Rep. Femi Gbajabiamila, and the new Speaker of the Ghanaian Parliament, Mr. Albert Bagbin, have agreed to strengthen parliamentary relations in a bid to find lasting solutions to challenges such as the trade dispute involving some Nigerian traders in Ghana.

The two speakers reached out to each other during a zoom meeting they held on Friday.

Gbajabiamila told his counterpart that the two countries were like siblings and should continue to explore the avenue of parliamentary diplomacy in addressing shared challenges, adding that there was much both could learn from one another.

The Nigerian Speaker also introduced the project he initiated with five other African Speakers, namely the Conference of Speakers of African Parliaments (CoSAP), saying that last year they worked together to advocate debt relief.

He further stated that this year, African Speakers and Heads of Parliaments were expected to gather in Abuja to explore how they could work better together to tackle collective challenges.

While congratulating the Ghanaian Speaker for his success at the recently contested polls, Gbajabiamila said while he worked very closely with the predecessor, he looked forward to doing the same with Bagbin in continuation of the age-old tradition of solidarity between both nations.

The Nigerian Speaker updated his Ghanaian counterpart on his visit to Ghana late last year in an effort to douse tensions and extract commitments from the Ghanaian government over the trade dispute.

He said he would want the discussions on the matter to continue under the new Ghanaian Speaker.

“I look forward to working with you. There are a lot of issues for both our countries, that, I think through Parliamentary Diplomacy and backchannel discussions, we can resolve for the people of both countries.

“I’m sure you are aware of a couple of them, including the relationship between Ghana and Nigeria in terms of our traders and residents over there and yours over here too. I think the onus rests upon both of us to try and resolve whatever issues there are. We started on this trajectory last year with the former speaker and we made very significant inroads and headway.

“I visited Ghana, I met with some of your ministers, including Mr. President and very far-reaching decisions were made and we are expecting outcomes of a report from your Minister of Trade. We were supposed to set up a friendship group between the two parliaments. That group has been set up by the Nigerian Parliament and if the list is not with you yet, I’m sure in the next few days, you will get it.

“Your President was absolutely gracious, he was absolutely wonderful. He met with us, he has a rich pedigree with Nigeria as you all know, so it worked out well. We just need to cement it, and I’m sure that between you and I, we will be able to take this a notch further.

“I want to use this opportunity to invite you to Nigeria as well, we will be able to discuss a lot of things and of course there is the issue of CoSAP, which I’m sure in your handover notes you are aware we set up with some African countries. The issue at hand last year was debt relief for African countries, that has strangulated many countries’ economies based on the debt portfolio they had”, he stated.

Gbajabiamila said COSAP would have its inaugural meeting this year in Nigeria where “hopefully we will be able to concretise on that issue and actually address other issues going forward for this year.”

“There are two issues that are critical in this moment like the relationship between Ghana and the Nigerian traders and the issue of CoSAP, and I’m sure there will be many more issues as we go along”, he said.

He also used the opportunity to invite Bagbin to visit Nigeria to deepen the parliamentary cooperation between the two countries.

On his part, Bagbin said he welcomed the idea of having a better relationship with the Nigerian Parliament and that he was ready to reciprocate the Nigerian Speaker’s visit so that they would discuss issues.

He also applauded Gbajabiamila for coming up with the idea of CoSAP, which he described as a noble project.

“On the issue of CoSAP, yes, we already have somebody as the focal person and it’s not only the handover notes, I have also been given a brief on CoSAP, and I want to applaud your efforts for the initiative, it’s a very good initiative and it’s going to propel parliamentary diplomacy to a higher level.” So, definitely, you have my support in that direction”.

“I am sure other African countries are looking up to Ghana and Nigeria to show the way, and I’m sure that with your immense experience and what I have gone through over 19 good years in parliamentary diplomacy, I am sure that there will be nothing that we will not be able to surmount.”

The two Speakers agreed it was important to meet sooner rather than later and concluded with an agreement to meet in Abuja before the first half of this year.

END_OF_DOCUMENT_TOKEN_TO_BE_REPLACED

The Coalition of United Political Parties (CUPP) has berated the Speaker of the House of Representatives, Femi Gbajabiamila over the… 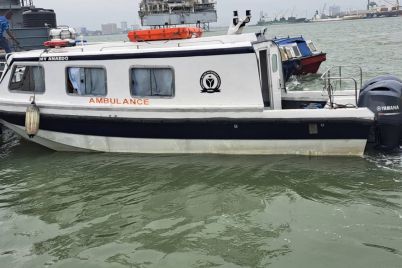