The House of Representatives, on Thursday, said there was no time at its Wednesday plenary that a motion on the resignation of the Minister of Communications and Digital Economy, Isa Ali Pantami, was treated, let alone being shut down.

The House at plenary on Thursday, through Rep. Ahmed Jaha from Borno State, said it was appalling that some section of the media reported that Speaker Gbajabiamila had shut down a motion brought by the Minority Leader, Ndudi Godwin Elumelu, on Pantami.

Jaha, who came under Order 6, Rule 1 and 2 of the Standing Orders of the House, which border on matters of privilege of the individual lawmakers, the same order cited by Elumelu on Wednesday, said there was a complete misrepresentation of what happened in the chamber.

He explained, “I woke up early in the morning today to have my Sahur and came across media publications that this House took a position and refused or stopped the Minority Leader from bringing a matter for the removal of the Minister of Communications and Digital Economy.

“He said his privilege was breached because as someone that was in the chamber on Wednesday, there was no motion that was blocked by the Speaker, who presided over the day’s plenary.

“From what happened, this House did not stop any such move. What I know is that the presiding officer only said the order cited was wrong and that the Minority Leader can come through the right order.

“There was no point where this presiding officer stopped the motion (calling) for removal of the minister.”

He said the issue of insecurity was a very serious one, noting that, “The interest of the nation is above any individual interest.”

Before ruling on the matter, Speaker Gbajabiamila said as Rep. Jaha rightly observed, Hon. Ndudi Elumelu came under Order 6, which dealt with matters of privilege.

“As provided for in our rules, matters that come under privilege are not debated. They are not motions. They are not seconded as a motion should.

“I think it behooves on all of us to educate our constituents on such matters. It was not a motion. We noted the privilege. We only followed our rules. It’s important that our constituents get to know. As is the practice, your point of order is noted.”

After Jaha, Rep. Uzoma Nkem-Abonta came under the same matter of privilege. He said the matter at hand suggested that the people outside were mindful of what happened in the House.

He then suggested that it should come under motion on notice for the House to take a clear position.

The Speaker said as observed, there was no motion on the floor of the House on the matter on Wednesday.

The Speaker went ahead to advise the journalists covering the House to always report what transpired in the House accurately.

“Abonta, if you have a motion or Hon. Elumelu has a motion, you know the proper thing to do. We have a procedure to follow, and I’m sure members will do justice to it”, Gbajabiamila added.

END_OF_DOCUMENT_TOKEN_TO_BE_REPLACED 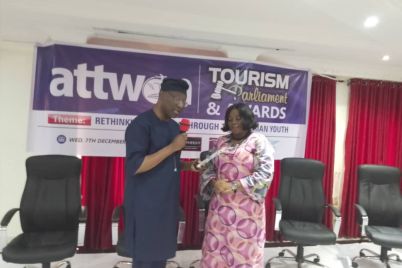 Dr Oludayo Gideon, Chairman, Aeroport Group of Companies, on Wednesday advised the Federal Government to inculcate tourism as a subject…