Presenting the items on behalf of the Association at the headquarters of the Nigerian Army Armoured Corp(NAAC) Bauchi, Acting Coordinator of the Association, Mrs Rifkatu Audu said the aim was to cushion the plights of the widows.

She said eight of them whose husband’s died between January and June this year were selected, stressing that the event was organized for the wives of the fallen heroes at the barracks to empower them and alleviate their sufferings. .

She pledged that NAOWA will continue to play their role as mothers to support and encourage their husbands, wives of officers and soldiers.

Items donated included a 50kg bag of rice, a wrapper and undisclosed amount to each of the beneficiaries.

She promised that the Association would continue to do more to improve the welfare of the needy and less privilege in the society., and advised the children to always have a positive outlook towards life.

She assured the Association of the Agency’s support in assisting the needy and less privilege, and prayed God to continue to protect and guide the military as they discharge their duties of protecting lives and property of Nigerians.

END_OF_DOCUMENT_TOKEN_TO_BE_REPLACED 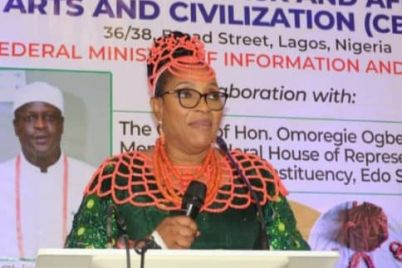 The Centre for Black and African Arts and Civilisation (CBAAC) has  urged Nigerians to embrace peace and jettison all tribal,…

The House of Representatives has demanded investigation into the recent murder of residents of Igangan, Igbo- Ora, Ayete, Tapa in…