Ahead of the forthcoming Governorship Election in Osun State, the Member representing Obokun / Oriade Federal Constituency of Osun State , Dr Busayo Oluwole Oke, has appealed to all the aggrieved Party members in the State to sheathe their swords and work as a strong force ensure a total victory for the Party in the future Elections .

In a statement made available to news men titled, ” Allow Peace, Unity In Osun PDP ” by the lawnmaker who is also the Chairman of the House of Representatives Committee on Public Accounts, he called on Senator Francis Adenigba Fadahunsi, the only Senator on the platform of the party from Osun State to quickly rise up to the challenge and unite all the aggrieved factions in the state in the interest of all the stakeholders.

He equally counseled that Senator Fadahunsi being the only Senator on the platform of the party from Osun State should automatically be the leader of the party in the state while by tradition, practices and convention, Senator Ademola Adeleke being the erstwhile gubernatorial candidate of the party in the 2019 election, ought to have been adopted for the coming election, saved for if he declined such adoption.

According to Dr Oke, , ” in the interest of our great Party, PDP, am appealing to all feuding factions in Osun State Peoples Democratic Party, to sheathe their swords, embrace peace, so that the party’s bright chances will not be scuttled and its resounding goodwill will not be squandered in the forthcoming Osun governorship election .

” Senator Francis Adenigba Fadahunsi as the only Senator on the platform of the party from Osun State which ultimately makes him the leader of the party in the state while by tradition, practices and convention, Senator Ademola Adeleke being the erstwhile gubernatorial candidate of the party in the 2019 election, he ought to have been adopted, saved for if he declined such adoption

He pointed out that there was no better time than now for all party chieftains, stalwarts and stakeholders to come together and nip in the bud the looming disaster waiting to consume the party due to selfish interest of some members but which must not be allowed to happen.

While stating the advantage position of Senator Fadahunsi’s emegence from the Ijesaland to unite the Party, the lawnmaker appealed that Senator Fadahunsi should bring his weight, position and office to bear and genuinely reconcile all the factions.

Oke who noted with pride that for the first time in the history of the party in the state, three top Executive members came Ijesaland – (South West National Vice Chairman, State Chairman and State Public Relations Officer), saying that once all the aggrieved Party members were able to resolve their diffences amicably, future Elections would favor the Party

He advised that as a first step for permanent peace, all members having pending Court cases against the party to withdraw them immediately in the interest of peaceful reconciliation, stressing that “every party faithful stands to reap bountifully if the PDP wins the forthcoming governorship election in the state and that the Ife/ Ijesa zone might even clinch the the Deputy governorship ticket of the party”.

According to him, ” the development is a needless distraction that will not do anyone any good at this point in time, instead of bandying petitions about, all hands should be on deck and geared towards efforts at winning the forthcoming governorship election in the state and at the Federal level”.

He appreciated all Party leaders, members and the stakeholders in Obokun Oriade Federal Constituency for their loyalty and steadfastness in ensuring the party maintained its stronghold.

END_OF_DOCUMENT_TOKEN_TO_BE_REPLACED 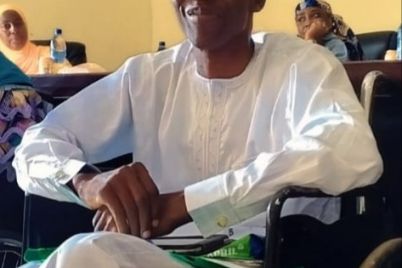