…Harps on unity among members

As the 2023 general elections draw closer, the Chairman of the Peoples Democratic Party, PDP, Governors’ Forum, Hon Aminu Waziri Tambuwal has stressed the need for leaders and members of the party to unite and work as an indivisible team with a view emerging victorious in the election.
Tambuwal, who is the Governor of Sokoto State said this during an interactive meeting he held with the States’ Chairmen of the PDP on Wednesday night in Abuja.
Describing PDP as the party to beat in the next year’s general elections, the Governor, who has a presidential ambition, reiterated the determination of the party to rescue Nigeria.
Speaking with journalists at the end of the closed door meeting held as the Sokoto State House, Asokoro, the Governor said, “Our party stands a very good chance, our party is the party to beat in Nigeria today”.

Asked about his message the members of PDP nationwide, Tambuwal said, “Unity, unity, unity of purpose and understanding and working together for us to actually realize the all important goal of rescuing Nigeria”
Speaking about his meeting with the States Chairmen of the PDP, the former Speaker of House of Representatives said, “It is about consultation on the possibility of my running for the office of the president and seeking the mandate of our party and members and leaders as standard flag bearer of the PDP in 2023 presidential election
“In terms of reaching out to the grassroots, they (state chairmen) are key and critical mass of leadership of our party at the state level and at that level that is very very important.
“So the interactive has been very wonderful, mutually beneficial and I believe that we are beginning to consolidate on our partnership on that”, he stated.
Speaking in the same vein, the Chairman of PDP in Kaduna State, Hon. Felix Hassan Hyat, explained that they ( the Chairmen) are more interested in the unity of the party as our number one cardinal objective.

Hyat, who is the Chairman of the forum of PDP State Chairmen, said, “We are more interested in the unity of the party as our number one cardinal objective because we believe that the party has to come back to rescue Nigeria and we are asking everybody to join forces.
“We cannot have more than one president at a time and therefore among all others, there must be unity of purpose amongst them just like among all other members of the party,.
“We want to move together and we want to make sure that whoever picks the ticket wins the election.
“Well we know that this is a season of interactive activities with various interest groups and the chairman of the governor’s forum is one of the pillars of the party in the country and incidentally he is also one of the presidential aspirants,.
“So, he only called us to inform us officially of his interest to go into the race and to seek our support like any other aspirants”, he stated.

END_OF_DOCUMENT_TOKEN_TO_BE_REPLACED 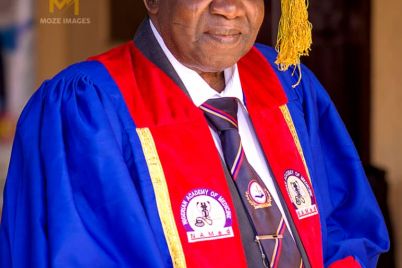 Prof Cornelius S. S Bello was recently inducted as a Fellow of the Nigerian Academy of Medicine. He was elected…

By Sarauniya Usman, Abuja The new management of thFederal Housing Authority on Thursday embarked on a tour of the estates…