The Speaker of the House of Representatives Rep. Femi Gbajabiamila has condoled with the government and the parliament of the Republic of Uganda over the death of the country’s speaker Rt. Hon. Jacob L’Okori Oulanyah.

Gbajabiamila, who was represented by the Deputy Speaker, Rt. Hon. Ahmed Idris Wase, was at the Ugandan High Commission on a condolence visit in Abuja and was received by the Defence Attache, Brig. Gen. Herbert Rwego.

“We are here to condole with you on the huge loss of our friend and a colleague. On behalf of Mr Speaker, Rep Femi Gbajabiamila and members of the Nigerian Parliament, we extend our condolences to the Ugandan Government and the people of Uganda, particularly its parliament over the passing of Rt. Hon. Jacob L’Okori Oulanyah,” he said.

He prayed for the repose of the soul of the late speaker, whom he described as a nationalist who always worked and ensured the development of democracy and his country.

Earlier, the Ugandan Defence Attache, Brig. Gen. Herbert Rwego, who represented the High Commissioner, thanked the speaker for the condolence visit and extolled the diplomatic relationship between the two countries.

END_OF_DOCUMENT_TOKEN_TO_BE_REPLACED 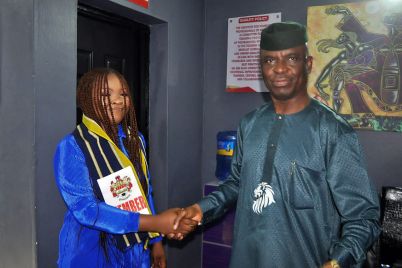 Mutiat Enehuwa, Chief Executive Officer, Verve Mutex Travels, has advised her colleagues in the tourism and hospitality industries to focus…

The Minority Leader of the House of Representatives, Hon. Ndudi Elumelu, has called for extra vigilance and aggressive multi-sectoral collaborative…