The month of March is specially celebrated as women’s month and March 8 is the day set aside by the United Nations as the ainternational Women’s Day.
Year in year out, the month is celebrated with many activities including talks, meetings and many more.
In all of this, there is special focus on how many, have fared in their careers and in the different spaces where they exist. This is amidst the challenges they contend with and their struggles for equality in society.
One of such gathering was the Beijing conference of 1995 where the world had recognized as never before that gender equality was critical to the development and peace of every nation.
This year 2020, is 25 years post Beijing conference, which makes it imperative to examine how far women have come.
The media is one sector that has provided platforms to push and echo the equal rights agenda. But has she been a good example of this agenda to encourage more women rights, representation and with holding the reins of power?
How has the media fared in giving support to women, issues concerning them and the way it represents the female folk in its reportage, all over the world and especially in Nigeria?
Given the fact that its is only when women are comfortable in their profession that they can give support to their tribe.
Twenty five years ago, women in leadership positions were like a needle in a haystack. Today, even though there had been some measure of progress it is still a very minute number that rise high enough to decision-making levels where they have the final say.
It is still pretty much a male run profession with brothers passing on to brothers the batons of leadership in the most key and sensitive positions.
Not only this, the main beats like Politics, Diplomatic relations, Security etc were manned by men while the women are confined to cover beauty, fashion, entertainment.
With consistent determination and sheer dint of hard work, the narration seems to be changing as the stereotype is being broken and women are now being assigned such beats.
Over the last 15 years, women are seen holding strategic positions which were hitherto tagged as mens position especially key leadership positions.
Today, not less that seven women now own their media organisations. Some of them are Toun Okewale Sonaiya, Agatha Amaka, Hajia Binta, Kambili Osadolo Ehima and a few others preferred not to be named.
We also have reputable women as Chairmen of Board and Managing Directors of media organisations, Mrs Angela Emuwa Punch Newspapers, Dr Tosin Dokpesi MD of AIT, City FM Boss and many others including from northern Nigeria.
And in positions of General Managers, Heads of Stations, Editors, Bureau Chiefs, the numbers keep growing. Of particular interest are female bloggers and online publishers.
We celebrate all these women because they have played significant roles in giving support to women issues and consistently raising awareness on the need for gender equality in Nigeria.
Regardless of these pluses, there are still issues left unresolved which have overbearing influences on the performance of women in the media. They include sexual harassment, intimidation, bullying, unequal pay and patriarchy still reign in the media.
Media regulators and proprietors still have major roles to play in putting structures in place that will protect women in work places. Most of the cases when they come up were often dropped by the victims. This has seen many young women exit the profession.
Women managers have major roles to play in mentoring and acting as a shield for many of the young women willing to grow in the profession.
It has also become very important to reorientate many young women who desire to work in the media that the media does not connote glitz and glamour and connections, but is rather a tool to impact positively on society.
They should see media as a platform to xray issues affecting society with a goal to make impact, improve and cause change.
For the media to aptly portray the women agenda, women need to be clear about how they want their stories shared. They should be able to come up with compelling content and information that will attract the attention of stake holders rather than go the route of sensationalism.
Women need to learn the art of media engagement and be ready to sweat it out until they get results. Women doing this already, equally need to give support to the upcoming and their contemporaries to enhance their capacity as well.
While the future moves towards being female, Nigeria needs to go back to the drawing board to come up with strategies that will place women side-by-side men.
This year’s theme #iamgenerationequality needs to be cascaded down to every individual such that come March 2021, Nigeria would have improved from where it is in 2020.

Omolola Oladimeji is a Media Practitioner and Team Lead for Women in Media Development Initiative.

END_OF_DOCUMENT_TOKEN_TO_BE_REPLACED

Reps Yet To Take delivery of Cars

It has come to the attention of the House of Representatives that a newspaper report on Friday, March 27, 2020,… 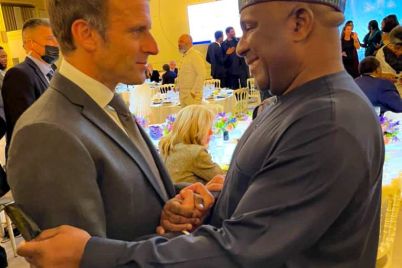 The presidential candidate of the All Progressives Congress, APC, Asiwaju Bola Ahmed Tinubu has congratulated Abdul-Samad Rabiu, Chairman of BUA Group, on his reappointment as President of…