This is contained in a statement made available by Director Information, Press and Public Relation,Henshaw Ogubike in the OAGF,

According to the report, these payments were analysed from the data obtainable from the Open Treasury Portal of which it further stated that this payments totalling 1,353 were made between the period of January to April, 2020 to various Ministries, Parastatals, Agencies and Educational Institutions.

“To put the records straight, it is important to emphasise the fact that the Open Treasury Portal which was launched by Mr. President on 9th December, 2019 was specifically done to enhance transparency through the daily uploading of payments on the Treasury Portal of amount in excess of N5 million by Ministries, Departments and Agencies (MDAs). This is the highest degree of transparency which had ever been implemented in this country”.

According to the statement,this daily payment reports do indicate the beneficiary, purpose of payment and the amount by the respective MDAs. It is the responsibility of every MDA to give very clear and unambiguous description to these payments which are in turn electronically consolidated and uploaded on the Open Treasury Portal.

These payments being referred to by the NGO that had been uploaded on the platform had correct classifications in the appropriate accounting and expenditure subhead from which consolidated financial statements, at the end of the year are audited by the Auditor-General for the Federation.

” Any observation on such transactions are always put together by the Auditor-General for the Federation and submitted to the Public Accounts’ Committee of the National Assembly which in turn calls on the respective Accounting Officer of the MDAs to come and defend or respond to such issues and observations”.

The Government Integrated Financial Management Information System (GIFMIS) that is presently in operation has clearly provided for sub-modules in which necessary descriptions relating to such expenditures are entered.

It should also be emphasised that the Transparency Portal Policy launched by Mr. President on 9th December, 2019 indicated that MDAs are responsible for every transaction and report uploaded to the portal.

The Open Treasury Portal also provides online, real-time interaction with the general public to give clarifications to issues emanating from the uploaded transactions. The general public should note this and utilise this facility.

AGF advised the public to disregard the misinformation by (HEDA) and that the Office of the Accountant-General of the Federation (OAGF) will continue to ensure prudence, transparency and probity in all financial transactions and management.

END_OF_DOCUMENT_TOKEN_TO_BE_REPLACED 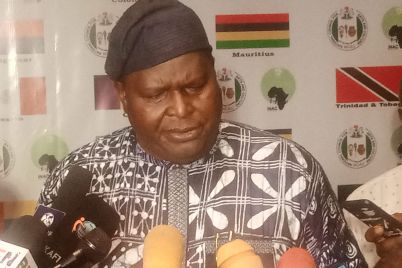 . In the past five years, the National festival of Arts and Culture, has been redefined and refocused as the…

Speaker Femi Gbajabiamila has hinted that House of Representatives will ensure that the Petroleum Industry Bill (PIB), protect in the…