The All Progressives Congress (APC) is deeply saddened by the death of our immediate-past National Vice Chairman (North West), Alh. Inuwa Abdulkadir esq.

In a statement signed by Yekini Nabena Deputy National Publicity Secretary All Progressives Congress (APC), until his death, Alh. Inuwa Abdulkadir esq was also the Chairman Governing Board of the National Agency for Food and Drug Administration and Control (NAFDAC) and Chairman, Governing Council of Sokoto State University. He was once Attorney General of Sokoto state and Minister of Youth and Sports Development.

He held the traditional title of Magatakarda Babba (Chief Scribe) of the Sokoto Sultanate.

The APC has lost a grassroots politician, true progressive and distinguished personality who served the party and country meritoriously and at the highest level. In grief, we urge all to remember and be comforted by the positive impact and indelible strides the late Alh. Inuwa Abdulkadir esq left during his time on earth.

We express our deep condolences to his immediate family, the Sokoto sultanate, the government and people of Sokoto State. May Almighty Allah be merciful and grant him Aljanat Firdaus.

END_OF_DOCUMENT_TOKEN_TO_BE_REPLACED 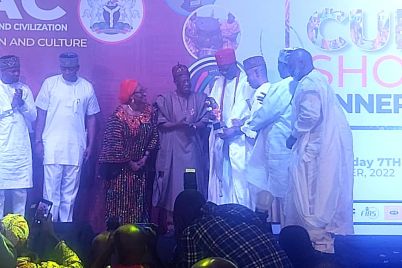 Ooni of Ife, others bag CBAAC-FESTAC at 45 award of excellence

Oba Adeyeye Ogunwusi, Ooni of Ife, on Tuesday bagged the Centre for Black Arts and Africa Civilisation (CBAAC) and Festival…

Ize-Iyamu exposes plot to cause Crisis amongst Edo APC aspirants