Bauchi State Governor, Senator Bala Abdulkadir Mohammed has denied rumours of any misunderstanding between him and one of the illustrious sons of the state, Alhaji Bala Wunti.

To this end, the Governor said his administration is in full support of the humanitarian activities embarked upon by sons and daughters of the state who are always willing to render philanthropic services to the State.

The Governor was speaking when he received a delegation from the family of Sheikh Dahiru Usman Bauchi on sallah homage at Ramat House , Bauchi yesterday .

He noted with satisfaction, the outstanding support of the Islamic leader, Sheikh Dahiru Bauchi to his administration through pervent prayers.

“I don’t have any misunderstanding with Bala Wunti as against rumours going on even on the ongoing renovation of the mosque of Sheikh Dahiru Bauchi. Bala Wunti officially told me about it and I commend him for that.”

“Bala Wunti is the kind of people we are looking for, I am in full support of all the projects he is doing to us in Bauchi state.

“Please extend my appreciation to our father and Islamic leader, Sheikh has done so much to me.”

Ibrahim Sheikh Dahiru Usman Bauchi who led the delegation used the opportunity to offer special prayers for the success of the administration of the Governor Bala Mohammed.

Bauchi state government has declared that no legitimate civil servant will be deprived of his or her salary as it has so far paid more than sixty percent of its workers their July salaries.

The Commissioner who debunked allegations on the non payment of July salaries by the state government, reassured that, legitimate workers would continue to recieve their salaries as at when due.

He apologised on behalf of the state government to legitimate civil servants who are yet to receive their July salaries due to the Banks challenges.

Dr Aminu Gamawa insisted that, out of all the states of the federation, Bauchi state has been consistent in the payment of salaries and pensions.

According to him, payment of salaries and pensions is the priority area of the administration of Governor Bala Abdulkadir Mohammed upon assumption of office.

The Budget and Economic Planning Commissioner said the governor has introduced many reforms as part of steps to block leakages and ghost workers in the state’s payroll.

“As against the rumour on the payment of July salaries, I want to inform the citizens of Bauchi state that Senator Bala Abdulkadir Mohammed has already paid the salaries, but we realised that some are yet to receive their entitlements, the problem is not from the government is from banks.

“I want to apologise on behalf of Governor Bala Mohammed to those who are yet to receive their salaries and to legitimate workers who were also affected by our verification exercise.” Because of the public holidays on Thursday and Friday, it also affected the payment, but are hoping everyone will receive alert by Monday or Tuesday.”

“No body and I repeat it, no any legitimate civil servant in Bauchi state will not continue to receive his or her salaries, we have already provided platforms for receiving complaints, and we are ready to expedite action on them.”

“But people are now using issue of payment of salaries for politics and I know those that are benefiting from ghost workers will also make noise.”

“For clarification, the LEA, LGA and PHCA staff were paid fully between 24th July, 2020 and 27th July, 2020, also all staff banking with Microfinance Banks and Bank of Agric were paid state salary and currently paying salaries in their respective Branches and the State Salary for remaining staff banking with commercial banks for July 2020 were enrouted to the individual employees accounts in all commercial Banks via NIBSS PayPlus service platform.”

“The platform anchoring epayment in the country has been going through challenges in the last six weeks.”

On the payment of thirty thousand naira new minimum wage, the Commissioner said already the state has commenced the payment from level one to seven.

He recalled that, on the inception of the administration, it has discovered a lot of fraud and ghost workers in the payroll of the state government which necessitated the Governor to set up a committee responsible for sanitizing the system.

Dr Aminu Gamawa said all the reforms introduced are to enable the state government free resources for the employment of qualified citizens into the state civil service.

“All what we are doing is to free resources thereby eliminating fraud, ghost workers and even clean our system.”

“We inherited a lot of pension backlog, we are determined to pay all serving and retired civil servants their salaries and pensions, but that is only possible if we end the corruption in the system and make savings.” END

END_OF_DOCUMENT_TOKEN_TO_BE_REPLACED 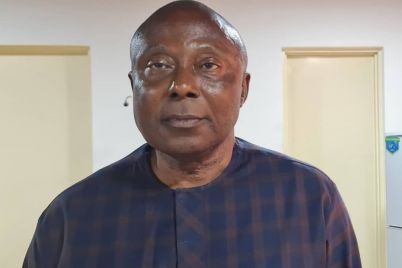 By Sarauniya Usman, Abuja The Coalition of Civil Society Organizations In Nigerian (COCSON) has described the corruption allegations against Acting…