Apparently disturbed by the recent flood disaster that devastated many communities in some local government areas across Bauchi State, the Federal government has directed the National Emergency Management Agency (NEMA) to assess the situation and provide necessary support to the affected persons to cushion the effects of the disaster.

Similarly,President Muhammadu Buhari has presented to the state, assorted grains from the National Food Reserve, approved as palliative for distribution to vulnerable persons affected by the recent restriction of movement to curtail the spread of COVID-19 pandemic.

Minister of humanitarian Affairs, Disaster Management and Social development; Sadiya Umar Farouq who led the federal government delegation to Bauchi over the weekend sympathised with the government and people of the state over the flood and windstorm disaster that occurred in some parts of the state describing it as most unfortunate.

She lamented that “It is sad that these have resulted in the loss of lives, damage to properties, destruction of livelihoods and farmlands. Preliminary report on the incidents indicate the need for relief intervention and the National Emergency Management Agency has been directed to assess the situation and provide necessary support to the affected persons to cushion the effects of the disaster”.

According to her, “I am here on behalf of President Muhammadu Buhari; GCFR, to present to you, assorted grains from the National Food Reserve, approved as palliative for distribution to vulnerable persons affected by the recent restriction of movement to curtail the spread of COVID-19 pandemic”.

She added that, “We all know that the outbreak of the pandemic has brought about changes and challenges to our normal ways of living. Most obvious of this is on the vulnerable persons that depend largely on others for their daily survival. Such persons are the aged, people living with disabilities and persons of concerns, that deserve support in terms of basic necessities including food”.

The Minister who noted that Bauchi State is known to be one of the major food producers in the country with the citizens engaged in farming activities, however lamented that the annual occurrences of flood have continued to threaten this potential.

She recalled that “Flood has become a recurring experience in Nigeria. After the 2012 devastating flood, a similar one occurred in 2018 leading to a declaration of disaster emergency in many states”.

She said “Though climate change has been largely blamed for this increasing phenomenon, it is our responsibility as Government and people to evolve strategies to minimize losses through adherence to warning alerts, early preparation and proper response”.

“May I draw the attention of Your Excellency to the 2020 Seasonal Rainfall Prediction and the Annual Flood Outlook. These documents have forecasted flood situation for different parts of the country. The Annual Flood Outlook informed that 102 Local Government Areas, in 28 States fall within the highly probable risk areas, while 275 Local Government Areas in the 36 states of the Federation including the Federal Capital Territory fall within the moderately probable flood risk areas”.

Receiving the Minister, Bauchi State Governor, Senator Bala Abdulkadir Mohammed expressed sincere gratitude to the federal government over the gesture,saying that the intervention came at a time the state government was looking for a way out of the immense problems considering the magnitude of devastation in those flood ravaged areas.

Governor Mohammed who was represented by his deputy, Senator Baba Tela promised to ensure equitable distribution of the relief materials, saying that his administration has provided emergency intervention to cushion the effect of the disaster on the victims.

Our Correspondent reports that the recent flood and windstorms devastation occurred in parts of the state like Darazo, Jama’are and Shira. END

END_OF_DOCUMENT_TOKEN_TO_BE_REPLACED 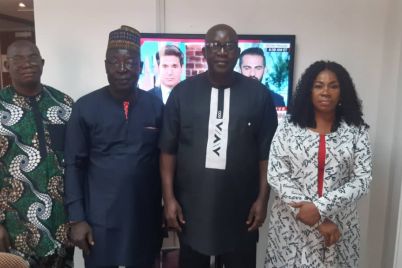 Nigeria’ s World Tourism Day celebration, Tuesday in next week, gained traction with the Board of Trustees chairman, Federation of…