President of the Senate, Ahmad Lawan on Thursday assured Nigerians that the Petroleum Industry Bill(PIB) which is before the National Assembly will change the fortune of the country by the time it becomes law.

“The PIB is going to be a piece of legislation that in our estimation will change the economic fortune of Nigeria and of course improve the earnings by our businesses who are here and we want to attract many more investments into the oil and gas industry in Nigeria,” Lawan said.

The Senate President spoke in his office while playing host to the British High Commissioner to Nigeria, Catriona Laing CB.

Lawan said the ninth Assembly would ensure the passage of the PIB as promised even though, he pointed out, that the bill had “suffered from a demonic influence” by refusing passage since 2008 when it was first introduced to the sixth Assembly.

“We are so confident that we will be able to pass this bill by April. We want it signed into law by May and we want every stakeholder to be a winner,” Lawan said.

The Senate President was also upbeat about the passage of the Electoral ammendment bill now being processed by the Assembly.

“I want to assure Nigerians that we have a target and we think it’s a realistic target. It’s doable and we have the determination and capacity to effect the ammendment(to Electoral Act) before we go on summer break in June/July and our committee has done so much work,” Lawan said.

On the security situation in the country, Lawan said the Government is doing everything possible to change the tide.

The Senate President referred to his recent meeting with President Muhammadu Buhari in which “our discussion centred on ensuring that the two arms of government work closely to ensure that we win this war as quickly as possible.

“I’m of the view that because the raining season will be here in the next two, three months, we need to secure the whole environment because for the peasant Nigerian, what is crucial to him is to be alive and go to his farm.

“If the environment is not secured, farmers will not be able to go to farms and that will be a big challenge to us because it is not going to be easy for us to provide food for all the Nigerian peasant farmers.

“So we are working together with the Executive arm of government and we are going to achieve a remarkable result.”

The Senate President also spoke on Farmers/Herders clashes and cautioned on religious or ethnic profiling.

“I believe in every society or Community, we have criminals…In every ethnic group, you have good people, you have bad people. Therefore, as leaders, we shouldn’t allow ourselves fall into temptation of ethnic profiling because it doesn’t help the fight against criminality and we need every hand on deck, North, South, Christians Muslims, to fight criminality wherever it is in Nigeria,” Lawan said.

Earlier, the British High Commissioner, Catriona Laing commended President Buhari over the appointment of the new Service Chiefs and urged the National Assembly to ensure the passage of the PIB and Electoral ammendment Bill.

END_OF_DOCUMENT_TOKEN_TO_BE_REPLACED 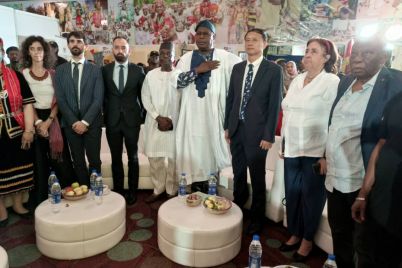 INAC : , HOW NIGERIA NETWORKED THE WORLD

It was a gathering of culture enthusiasts and lovers of Crafts and Arts, of different shapes and sizes, some expressive,…