The United Nation Development Programme (UNDP) has trained the Ekiti lawmakers, executive members on conflict resolution, to complement the Federal Government efforts of enhancing peace and insecurity in the country.

The training was on implementation of the ‘Conflict Sensitive Approach to Development Programme, Budget Formulation, Monitoring and Reporting’.

The Team Lead, Governance, Peace and Security Unit, UNDP Nigeria, Mr Mathew Alao, said that the essence of the training was to ensure cooperation among the stakeholders in the state especially, executive and the legislators.

Alao, who represented the UNDP Deputy Resident Representative, Mr Lealam Dinku said that the workshop was to ensure a rapport between the executive and the legislators as well as the civil populace in formulating the development agenda of the state.

“You will observe that most of the development programme are done under the table and by the ministry without the due consultation with the people.

And, this has engender violence in so many communities and we thought it fit that engaging government to be more opened is the best way to reduce violence at the community level.

“Particularly on issues of development programming, and that is the essence of bringing the Ekiti state legislators and some executives member as well as civil society to this forum,”he said.

He said that UNDP also had other programme to help in mitigating conflicts among the populace which include livelihood scheme for the victims of violence, early warning, early response mechanism

Others he said are ICT based warning platform that anybody can send message to and there will immediate response to such crisis.

He said that the organization also help in capacity building for security agencies to partner with the state government to manage the platforms created by the UNDP on conflict resolution.

He decried a situation where the youths are being used by politicians and left to become tools in the hands of those who will use them to forment trouble in the society.

“It is appalling, this cannot help the society, a child of school age should go to school, a person of working age should find something to work.

And, that is why UNDP is also partnering not only on this area but by getting these youth out train them, teach them on life-long empowerment scheme, that is the way out.

the issue of drug proliferation is also there, I said

According to him this is one of the ways to nip nipped conflicts in the bud, adding that people must be constructively engaged.

“We must find something for people to do, and we must continue the campaign not by mere words of saying it but in reality,

You must make them self dependant and self reliance, that way they will serve you better,” he said.

The Speaker of Ekiti State House of Assembly, Hon, Funminiyi Afuye, stated commended the UNDP for organizing the workshop organised by the United Nations Development Programme (UNDP) on implementation of the conflict sensitive approach to development programme, budget formulation, monitoring and reporting.

“You will agree with me that for any meaningful development to occur in any society, efforts must be intensified towards prevention of crisis and revolution of conflicts of any nature in such society.

“Business thrives only in societies where peace avails. Nigeria in recent times is faced with a lot of crises resulting in insecurity thereby being a clog in the wheel of the country’s development.

“Hence, this sensitisation workshop involving the critical stakeholders and civil society groups in Ekiti State is a relevant and timely intervention which will give a strategic direction to the state

Commissioner for Budget and Economic Planning in the state Femi Ajayi, lauded UNDP for initiating the programme which he said would help in conflict prevention and inter-agency cooperation in the state.

Ajayi said that the UNDP had also initiated a conflict prevention and peace building programme to help build a society free of conflicts and chaos through strengthening national capacity for prevention.

He said that the UNDP did this through building the skills of stakeholders in programme development, budget processes, monitoring and reporting for all inclusiveness and closer collaboration between them

This, he said, was with a view to facilitating immediate response to conflicts to give room for rapid development in the society.

He, therefore, described the workshop as relevant and timely, especially at a time that insecurity was a major challenge bedeviling the nation.

“Conflict is nothing but a major distraction in any society which prevents the achievement of meaningful development; if at all any could be achieved.

”UNDP in this regard could therefore be best described as a right step towards a right direction.

”UNDP had been a friend of Ekiti and had intervened in different areas which had made the organization indeed a huge supporting partner to the state.

“We are today witnessing another project which is expected to address and focus on implementing the activities that will deepen the culture of conflict prevention and peace building through peace infrastructure in Ekiti,” he said

According to him, this will include supporting the government to formulate a legal framework for the establishment of peace infrastructure.

“And, putting in place mechanisms to support a violent free society by strengthening the capacity of the lawmakers, key stakeholders and Civil Society Organisation (CSOs) operating in the state on a conflict sensitive approach to conflict prevention.

“This training is to sensitise participants with a more robust strategy towards implementation of the conflict sensitive approach to development programming, budget formulation, monitoring and reporting,” Ajayi said.

END_OF_DOCUMENT_TOKEN_TO_BE_REPLACED

The Speaker of the House of Representatives, Rep. Femi Gbajabiamila has described the passing away of the Alaafin of Oyo,… 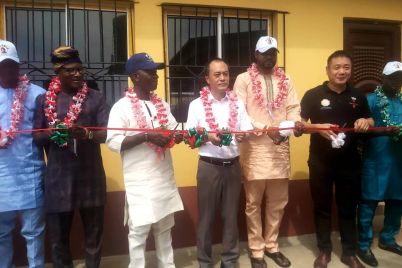 The Chinese community in Lagos State has renovated Fazil Omar Ahmmadiyya (FOA) Primary School in Okokomaiko, a suburb of the…