… Gives Highlight on Progress of Democratic Governance in Gombe State

Gombe State Governor,Alhaji Inuwa Yahaya has praised Nigerians for resolving to maintain democracy as the means of governance in the country, saying 22 years of interrupted democratic rule have proven naysayers wrong.

In a goodwill message to the people of the state on the occasion of the 2021 Democracy Day being marked today, June 12, 2021, the Governor expressed appreciation that Nigeria’s “democratic maturity has shattered the myths about African democracy being under the grip of one single leader or political party.”

He noted that as the largest country in the world, Nigeria will continue to hold the torch of nation building, democratic pluralism and political stability in Africa and the world at large.

The Governor stated: “After 22 years of uninterrupted democracy, I make bold to say that Nigeria’s democracy has come of age. We have witnessed successful transitions of power from one administration to the next, and from one political party to another.

“No doubt we have had our fair share of challenges. But if the past 22 years have taught us anything, it is that as Nigerians, we have accepted democracy as the political consensus on how we want our country to be governed.

“Whenever we are faced with challenges, we responded with the tenacity and maturity far above what the world expected from us. Oftentimes the world has written us off, and oftentimes we bounced back with greater strength and unity.”

Speaking on the progress of democratic governance in Gombe State, the Governor stressed that “we are living witnesses to how development and progress can be delivered through a robust democratic process.”

He noted that from a small rural community, Gombe has grown to “emerge on the pinnacle of Nigeria’s development as the fastest developing state in the country.”

Governor Yahaya attributed the growth of the state to “two-decades of hard-work, stability and progress that were made possible by the undying aspiration of our people for good governance and development.”

The Governor said: “During our two-year anniversary two weeks ago, we showcased our tremendous achievements across all facets of social and economic development, from road infrastructure to agriculture, education, health, water resources and environment, commerce and industry, rural and urban development, civil service reforms, youth and women empowerment among others.

“Our vision is to transform Gombe into a prosperous, fiscally responsible, politically inclusive and developmentally sustainable State, one that will serve as a model for the rest of the country bcause, we strongly believe that only through economic development, peace building and the provision of basic services as well as job and wealth opportunities for our people that we can deliver real dividends of democracy to our people.

“At the regional level, we are at the forefront of regional cooperation because we understand the strategic position of our young State in the Northeast subregion.

“By leveraging on our unique position, our comparative advantage in agriculture, the deployment of technology-driven solutions, and through our various reform initiatives and investments in essential infrastructure, we are positioning Gombe into a regional hub of agribusiness, commerce, trade and industry.”

Furthermore, the Governor said despite the prevailing insecurity in the region, Gombe has continued to witness relative peace and stability.

“Gombe is today the residential and investment destination of choice in the North. This positive state of affairs is sustained by our community-driven approach that fosters strong collaboration between Government, local stakeholders and security agencies. We shall continue to build on that in order to ensure lasting peace and stability,” he assured.

He reiterated the belief of Gombe State in Nigeria’s unity, as presented in its input to the constitutional amendment exercise, stressing that the state also believes that democracy is the only legitimate means of political participation and power acquisition.

“Gombe State, and our peace-loving people will not be party to any action or idea that undermines our unity or democracy,” he stated.

Governor Yahaya paid tribute to all Nigerians, both living and dead, “who have made (and continue to make) enormous sacrifices for Nigeria’s unity and democracy over the past decades.”

He continued: “I would like to also appreciate all members of our Armed Forces for their professionalism, commitment and belief in Nigeria’s unity and democracy. My gratitude also goes to our other arms of government – the Legislature and Judiciary – for the constructive role they continue to play in enriching and advancing our democratic culture and experience.”

In conclusion, the Governor commended the media for its role in democracy and nation-building, while stressing the need for concerted action in order to combat the encroaching menace of fake news and hate speech.

“We have seen how some media organisations surrender their platforms to promoters of fake news and disinformation, pushing the country to the brink of nationwide chaos. As the fourth estate of the realm, the media has a special responsibility to our country and democracy.

“As a government, we are committed to the welfare and security of our people and the entrenchment of a vibrant democracy that delivers real dividends to our people.

“While wishing our people a happy and peaceful democracy day celebration, I call on our people to continue to intensify prayers for peace and stability in our country”.

END_OF_DOCUMENT_TOKEN_TO_BE_REPLACED 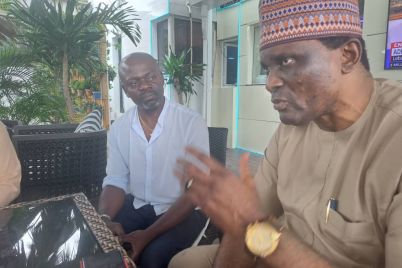 In a strategic swing to open larger collaborative reach out to key industry players, President, Tourist Boat Operators and Water…