The House of Representatives Committee on Youths Dvelopment has declared that all the
Orientation Camps of the Natiional Youths Service Corps, NYSC, across the country are saved for the Corps members and their Officials and dismissed reported cases of Corps members being tested Positive of the dreaded COVID-19 Virus.

Speaking after the members of Committee toured round the FCT NYSC Orientation Camp, located at Kubwa, Abuja, its Chairman,
Hon. Yemi Adaramodu( APC-EKITI), declared that there was no cause for concern, as all the COVID-19 Protocols were being strictly observed by both the Corps members and the the Camps’ Officials, right front point of entrances

Hon Adamodu stated that the reports reaching the Committee from the field,indicated that all the guidelines and protocols set to check the spread of the virus,were being observed religiously at the Orientation camps and which were being supervised by the officials of the Natiional Centre For Disease Control, NCDC and Medical officials for Safety Protocols.

According to the protols directives, ” all Corps members must wear facemask, wash their hands properly with running water and soap, dry their hands with disposable tisule papers, thereafter, they will proceed for the COVID-19 Virus test being carried out by NCDC team in collaboration with the Corps Medical officials and the results are released immediately

“At this point, anyone that is positive will be isolated for necessary medical care, no one is allowed into the Orientation Camps, being a Corps member or official without undergoing the laid down protocols,once the result turns out to be positive, you will be taken to the designated isolation centre to be quarantined by the NCDC team

” Myself and the Committee members are always in constant touch with the Director General of the Scheme, Brig-Gen Shuaibu Ibrahim and there has not been a single case of the Virus in any of the Orientation camps across the States of the Federation and the Federal Capital Territory, FCT, Abuja since the Orientation exercise kicked off

” On this note, the Committee and by extension the Natiional Assembly is reassuring that there is no course for alarm on the safety of the Corps members and the Camps Officials, based on safety protocols already on ground at the Orientation camps and we are also in constant touch with our Senate counterparts on Youths Dvelopment Committee. We will also be going round the States to monitor the situation by ourselves”.

It was reported that 48 Corps members tested positive of the dreaded COVID-19 Virus at ongoing NYSC Orientation Camps in Edo, Niger and Sokoto States respectively.

Speaking on the plan to further strengthen the Scheme, Hon Adaramodu hinted that the Nation’al Assembly will be collaborating with the Ministry of Youths Dvelopment to institute a Trust Funds for the scheme since over 65 percent of the Nation’s population were Youths

According to him, ” records show that over 400, 000 Youths participate in the scheme every year and there’s the need to make adequate provisions for them to keep the scheme running smoothly, the Trust will also provide seed finds for Corps members to start their own business ideas acquired during the entrepreneurship training at the orientation Camps

” This became necessary because the Scheme has come stay, it is only the avenue that brings together all Nigerians from different religion, ecthnic and social background for a whole year, even after the Service year,. majority of the Youths normally find it difficult go back to their States of Origin”

Hon Adaramodu expressed satisfaction with the condusive atmosphere at the FCT Orientation in which all the Corps members were engaged learning various skills at the various Skills Acqusion Centres provided at the orientation Camp and urged them to take the skills acqusition programme very serious as the Committee would be ready to assist serious minded ones amongst them once the Trust Funds was established to set their own business outfits.

He equally promised that the Committee would interface with the Minister of the Federal Capital Territory FCT, Mallam Musa Bello Mohammed on the need to put in place the necessary facilities at the orientation Camp , saying that the current situation on ground was bellow standard

In his brief remark, the NYSC FCT Coordinator, Alhaji Abdul Suleman said that the visit would further boost the morals of the Corps members and the Camp officials despite all odds.

He said that he Corps members have been disciplined since arrival at Camp and that the FCT administration had been supportive of the but pleaded that there was the need to provide more infrastrural facilities at the orientation Camp to make life more comfortable for the Corps members during their short stay.

END_OF_DOCUMENT_TOKEN_TO_BE_REPLACED 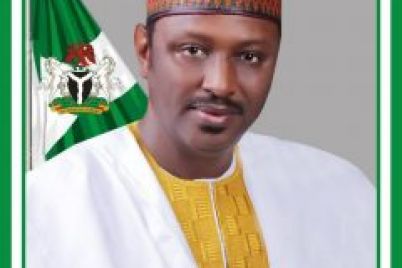