Former Vice President, Alhaji Atiku Abubakar has commended the Chairman, Board of Trustees, BoT, of the Peoples Democratic Party, PDP, Senator Walid Jibrin and others members for being very active in providing good leadership for the party so far.

Atiku gave the commendation in his speech at the last Thursday’s meeting of the National Working Committee, NWC, and the Board of Trustees, BoT, of the PDP held at its headquarters, Wadata house, Abuja.

The presidential candidate of the PDP in the 2019 general election, pointed out that the BoT has become the most active organ in providing leadership to the party.

He noted that since the PDP lost power in 2019 and became the leading opposition party, the BoT has been solidly piloting its affairs effectively.

In the words of Atiku, “I want to commend the BoT. Since we lost power, this BoT has become the most active organ in providing leadership to our great party.

“Because we have always had a President, who overshadowed the BoT, since the inception of the party, we didn’t see much of their (BoT’s) impact. “Now that we are in opposition, we can now see the importance of the BoT.

“I congratulate all members of the BoT for providing leadership to our party”, he said.
Atiku expressed the firm optimism that
PDP will live up to the expectations of Nigerians because “they know us more than any other party and we provided the best governance since the return of democracy to this country.

“I believe Nigerians are not going to forget those good old days. Yesterday, our opponents were rejoicing that there is a crisis in PDP. Today, I don’t know what they will be doing. They will be crying because PDP has resolved it’s own crisis.

“I commend everyone for playing a role to ensure the amicable resolution of our internal crisis. Crises are normal- you have crisis at home, in your department, your village and every where. It is normal. But what makes you different is the ability to resolve that crisis and we have proved to Nigerians that we have that ability to resolve our internal crisis. “The crises facing the country- banditry, kidnapping, name it, we have the capacity to resolve those crises”, he said.

In his speech, the BoT Chairman, Senator Walid Jibrin said that the party has resolved all the teething problems and ready for a seamless convention.

Jibrin pointed out that the BoT has accepted the position of the acting National Chairman of our party, following the provisions in the constitution of the party.

“The BoT has accepted the documents submitted by the larger caucus of governors, National Assembly members, former governors, former ministers, and so on and these include: the coming elective convention will be in October. They have also agreed to come with a proposed list to the BoT for their own input before NEC”, he said.

END_OF_DOCUMENT_TOKEN_TO_BE_REPLACED

President Muhammadu Buhari in a statement issued by his Special Adviser on Media and Publicity, Femi Adesina in Abuja, said… 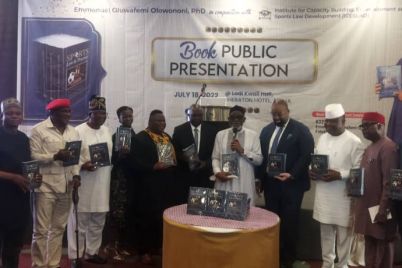 For the first time in the history of Nigeria legal jurisprudence , a book specially devoted to the tourism sector…