…Saddened by death of one Child

The children were abducted three months ago by armed bandits who stormed the school. UNICEF is however saddened by the death of one of the child while in captivity.

A release made available to our correspondent from Kano field office, UNICEF Nigeria, by it’s Communication Specialist, Samuel Kaalu, it quoted Peter Hawkins, UNICEF Representative in Nigeria saying, “we rejoice with families whose children have been freed”.

According to Peter Hawkins, the children spent 88 days in the hands of their abductors before being freed yesterday (27/08/2021) and described it as a tragedy and utterly unacceptable that one of the child died in captivity.

He said, Hayatu Hashimu was just six years old at the time of his death.

He said, “we rejoice with the families whose children have been freed and express our deepest condolences to little Hayatu’s family who have just suffered the worst loss on top of the tragedy they have gone through for 88 days.
“No family should lose a child just because it took the right decision to send that child to school. Schools should not be a target. Children should not be a target. Education is a fundamental right of every child and any attack on an educational institution is a violation of that right.

“We reiterate our call to authorities to take all necessary measures to ensure schools are safe for all children”, the release stressed.

UNICEF also said it will work with partners to provide mental health, psychosocial support and counselling services to both the freed learners and their parents.

The release also revealed that an estimated 200 Nigerian students are believed to still be held after school abductions that have plagued the country since December 2020. More than 1,000 have been abducted in these attacks from December 2020 to date.

It said the release of the Tegina students comes in the run-up to the International Day to Protect Education from Attack, on 9 September.

Nigeria is set to host the Fourth International Conference on the Safe Schools Declaration on 25-27 October 2021.

The theme of the Conference is “Ensuring Safe Education for All: From Commitment to Practice”. The Safe Schools Declaration, a political commitment to protect education during armed conflict, has been endorsed by 108 states – including Nigeria.

The October Conference will be the first to be held in Africa and provide an opportunity to galvanise support for, and accelerate implementation of the Declaration by bringing together governments, practitioners, and civil society to share good practice and strengthen cooperation to save lives and safeguard the right to education for all.

END_OF_DOCUMENT_TOKEN_TO_BE_REPLACED 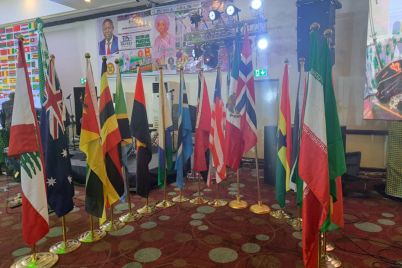 Today, the second day of the prestigious International Arts and Crafts Expo, in the city of Abuja, will herald talks…