The Speaker of the House of Representatives Rep. Femi Gbajabiamila has underscored the importance of collaboration between public institutions and the private sector.

Gbajabiamila said partnerships between the public and private institutions are bound to promote good governance and sustainable development.

The speaker Gbajabiamila said this on Monday during the signing ceremony of a Memorandum of Understanding (MoU) between the Office of the Speaker of the House of Representatives and the Nigerian Bar Association (NBA) on law reform.

The leadership of NBA was led by its National President, Olumide Akpata.

According to Gbajabiamila, the collaboration between the two bodies since the inception of the 9th House has witnessed positive results in the passage of some critical laws in the country

He said: “This is basically the formalization of something that’s already working. The signing of the MoU may seem symbolic, but I see it beyond that. I see it as a way of deepening our democracy and developing the country, which we all so passionately love.

“Contrary to what a lot of people think, I always believe that governance is about collaboration; it’s about everybody. It’s not about politicians alone, it’s about everybody, so we’ve got to maximize our efforts and potential to bold, bigger and better things for this country.

“For me, this is a critical collaboration between two very important sectors. This is a public-private partnership between the Legislature and the NBA.

The speaker commended the leadership of the association and what it has been doing for the profession while emphasizing the commitment, speed and diligence with which it worked and collaborated with the House on Police and Electoral law reforms, among others.

“I don’t think there’s been a time that the Legislature and NBA have worked so seamlessly together towards making Nigeria a better place”, he noted.

Earlier in his remarks, the NBA President, Akpata, appreciated the speaker and the House for being most accommodating with regards to collaboration and the potential of making progress together.

Saying that at the heart of the association’s mandate is the pursuit of law reforms, Akpata noted that the NBA is desirous of working with the Legislature to bring to bear legislation for good governance while noting that law associations are part of the legislative process in some countries.

He added that the signing of the MoU was to remedy the past situation where the NBA seemed not to be keen on working with the Legislature.

He recalled the signing into law of the Police Service Commission law as a result of the collaboration between the House and NBA following the 2020 #Endsars protests, saying it showed what collaboration of this nature can achieve.

He informed and solicited the speaker’s assistance about the Legal Practitioners’ Bill that is before the two chambers of the National Assembly.

He also commended the speaker and the House for the office space given to the NBA within the National Assembly complex.

The Special Adviser to the Speaker on Policy and Strategy, Dubem Moghalu, had earlier explained that the MoU was to formalize the ongoing operation between the Office of the Speaker and the NBA particularly on the issue of law reforms.

END_OF_DOCUMENT_TOKEN_TO_BE_REPLACED 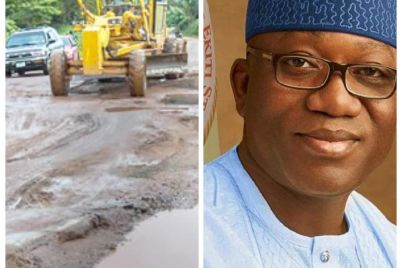 Why should I Praise Fayemi, By Wale Ojo-Lanre

ByWale Ojo- LanreAnd why not?Yes.Why not .That gap-toothed Governor of Ekiti State, Governor Kayode Fayemi should be pitied, praised and…

By Sarauniya Usman Abuja The Accountant General of the Federation, Ahmed Idris has reaffirmed the commitment of the Federal Government…