The Nigerian Communications Commission (NCC), has pledged to continually maintain high ethical standards in all its regulatory activities consistent with the Federal Government’s efforts to entrench the culture of accountability and transparency in the Ministries, Departments and Agencies (MDAs) of the Federal Government.

The Executive Vice Chairman and Chief Executive Officer of NCC, Prof. Umar Danbatta, gave the commitment at the inauguration of NCC’s Anti-Corruption and Transparency Unit (ACTU) by the Independent Corrupt Practices and Other Related Offences Commission (ICPC) on Thursday,in Abuja.

ACTU is the initiative of the ICPC, approved by the Federal Government as an in-house mechanism for corruption prevention within MDAs, in line with global best practices of building strong institutions and institutionalising good governance in the fight against corruption.

Represented by the Director, Legal and Regulatory Services, Josephine Amuwa, Danbatta said that the ICPC itself has recently attested to the Commission’s high ethical standards and professionalism as evident in the 2020 ICPC Ethics and Compliance Scorecard (IECS) report, which placed NCC ahead of other agencies in ratings.

The EVC said the ICPC’s verdict also lends credence to the 2017 report of the Bureau of Public Service Reforms (BPSR)-piloted Self-Assessment Tool (SAT) deployed in MDAs, where the NCC came off with a Platinum Level (Exceptional) award, a level 5 organization, the highest rating possible under the BPSR Assessment.

While noting that the NCC will continue to identify corruption-prone processes, practices and procedures within the system with a view to institutionalize compliant and corruption-free processes. Danbatta said the Commission’s efforts are focused on prevention through defined standard operating procedures and adherence to public service rules, circulars, guidelines, among others.

“The ACTU is a very important initiative of the government to combat corruption in MDAs and the Commission recognizes this fact as well as the role of ACTU in this regard,” he said, while urging the Commission’s ACTU members to continue to take their role seriously. He also said that Management will accord the ACTU team all necessary support to deliver on its mandate of combating corruption through prevention, education and enforcement.

While inaugurating the NCC ACTU, the Chairman of ICPC, Prof. Bolaji Owasanoye, said the ACTU is expected to effectively carry out its assigned functions including conducting systems study and review of processes and procedures of the NCC with a view to making appropriate recommendations to block corruption loopholes.

According to him, the Unit is also required to conduct continuous sensitization of staff on and against the ills of corruption, implement code of ethics, conduct corruption risk assessment and preliminary investigations into complaints received amongst others.

Owasanoye further stated that ICPC recognises the contribution of NCC in regulating and creating an enabling environment that gives telecom consumers universal access to affordable and equitable service as well as your support to the nation’s economic growth.

“I also commend the efforts of the management of NCC in ensuring high compliance with ethical and integrity standards as seen from the result scored by NCC in the 2020 deployment of the Ethics and Compliance Scorecard (81.15%),” he added.

In his remarks, the Director, Human Capital and Administration and ACTU Chairman at NCC, Usman Malah, assured of the commitment of NCC ACTU members to be sincere, of good character, exhibit positive attributes and be dedicated in the discharge of their duties.

“We shall be fully prepared for the responsibilities of the Unit. We would be impartial, transparent and guided by relevant laws in discharging the mandate of the Unit. As a microcosm of the ICPC in the NCC, the Unit will continue to complement the laudable efforts of the ICPC in the fight against corruption in government and the country at large,” Malah said.

END_OF_DOCUMENT_TOKEN_TO_BE_REPLACED 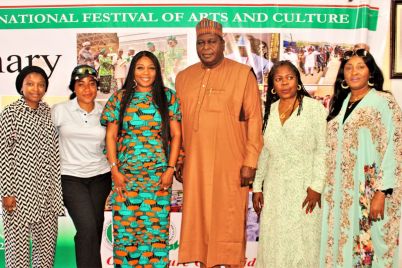 The Director General, National Council for Arts and Culture, Otunba Segun Runsewe has pledged his support to the IBB lady…

Segun Babatunde in Gombe Determined to ensure that the Education sector is placed on the path of progressive development, the…