The Oba Yoruba Abuja, Dr Olusegun Salawu, has appealed to the Inspector-General of Police to ensure justice for the family of late Mr Oluwagbenga Shittu, a mechanic, who allegedly died in police custody in Abuja.

The Oba made the call while briefing newsmen after he visited the family of the deceased, at Pyakasa community in New Lugbe District on Wednesday in Abuja.

He expressed sadness over the sudden demise of late Shittu, emphasised the need for the IGP to order a thorough investigation, into the remote and immediate causes of the deceased.

He explained that late Shittu was initially rescued by the police officers at Kabusa community, from an angry mob, for knocking down two passengers on a motorbike.

“Thereafter, the police moved Shittu to the station and the owner of the car that Shittu droved and had an accident with rushed to the station to bail Shittu and settled the medical bill for the treatment of the passengers that were injured.

” After settling the bills, he also appealed to the police to release Shittu and they insisted that he must bring a surety from Kabusa, to stand for him.

“He left the station with the hope of bringing the surety the next day.

” On getting to the station, the next day the police officers in charge of the case, told him that Shittu fell ill, and they rushed him to the hospital, and he eventually died.

” We are calling on IGP to order the investigation into the situation surrounding the demise of Shittu with a view to ensuring justice for his helpless widow and children,” the Oba said.

He also appealed to the Federal Capital Territory Social Development Secretariat to come to the aide of the helpless widow and her five children to enable them to be self-reliant.

Earlier, the Police Command in the Federal Capital Territory (FCT), had in a statement by its Public Relations Officer, ASP Yusuf Mariam, disclosed that the command had launched an investigation into the incident.

The PRO explained that the late Shittu was rescued by the police from the angry mob, who had been beaten him to a pulp.

She said that the suspect, as a result of the beating, fell ill and was rushed to the hospital for treatment where the doctor certified him dead.

“The FCT Commissioner of Police (CP) Bala Ciroma, sympathises with the families of the victim and has ordered a discrete investigation into the incident,” she said

END_OF_DOCUMENT_TOKEN_TO_BE_REPLACED

By Sarauniya Usman, Abuja A youth group, LYGEL Youth and Leadership Initiative (LYLI)  has urged the Chairman of Federal Character… 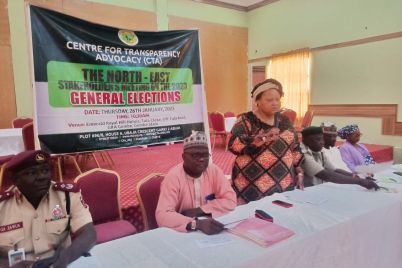 Center for Transparency Advocacy, CTA yesterday called for the investigation of alleged buying of Permanent Voters Card PVC by politicians…