Where is the Nigerian Bar Association?
Or which legal profession organ or association can deal with this bizarre act of this lawyer, Kayode Ajulo, Esq who has a thriving law office in Maitama, Abuja?
I think they say Law is a noble profession that entails being, compassionate, decent, fit and proper both in conduct, deeds and acts
And I think practitioners of such a noble profession should strive to be above board, act promptly when called to be unique and extremely outstanding in whatever they do.
I think the law profession must have a benchmark of excellence for its practitioners and officers both inside the court and outside the bar.
I think there should be measures and rules to punish or reward any practitioners who might have acted ultra vires or, above or beyond the set principles of the law profession
I also think there should be a rewarding system for whoever has added value to the profession in terms of outstanding acts, deeds and conduct?

It is on these premises that I want to lay a charge on Kayode Ajulo, one of the legal icons who bestrode the jurisprudential firmament of this country like a colossus.
Honestly, I do not know what is wrong with this young and outstanding lawyer
And I must confess that I may not know
I know he is a qualified and sound legal mind by all standards, a lawyer
who has capped his LLB, BL with a Masters in Law and a PhD, but I never know that he is just like this.
I also know that he is also the Maiyegun of Aare Ona kakanfo of Yoruba land, one of the rare chieftaincy titles of Aare Which is not just for anybody.
And that is why I am baffled and astounded by this act of his.
But the axiom ‘ don’t judge a book by his front page’ is apt and precise in the case of this erudite lawyer who is definitely on the ladder of greatness in his chosen profession
I am not out to destroy the progressive legal ascendancy of this vibrant soul but if exposing what he had done will amount to that, I do care not.
But it is just baffling and unfortunate that this young man in his prime can store in his behavioural patterns some unexpected and unfathomable acts and deeds which have been shielded away from the public
Yes.
I will not mind whatever conclusion you are having about this article but the truth must be uncovered about the manners of Kayode Ajulo
Yes it is a fact that you never know a man’s true character until he has money, fame and power
Kayode Ajulo by any standard of today’s measurement has all
Well framed by God. Blessed with a good and awesome look, neat and always decent, a power dresser, vibrant, and intelligent personality who God dashed with an uncommon oratorical gift.

Thus, he has it all
But that is where it seems the beauty stops
It seems Kayode Ajulo is now suffering from the stupidity of greatness which the French called folie de grandeur which now rules his sense of reasoning in a way that you will marvel at by the time I bare it all
The first sign of his arrogance was when I saw him at an International Conference holden in Abuja and I enthusiastically addressed him as Barrister Kayode Ajulo Esquire.
Do you know this guy called me aside and whispered ‘ Egbon, don’t address me as Barrister? It is not ethical. You can call me Maiyegun or Bamofin Ajulo, those are traditional titles. It is not fashionable in the legal profession to address me as Barrister Kayode Ajulo’s’
I was pissed off.
Infadigni tatem.
I lapped it up. I decided not to address him with either Bamofin or Maiyegun or Barrister but Mr Kayode Ajulo, and I noticed he took no offence.
Also recent, a friend of mine in the oil and gas business needs a lawyer to seal a contract, two lawyers were already scrambling for this brief
And because of the respect he has for me and he too knows the competence of Kayode Ajulo in handling such a matter, he agreed with my suggestion that that particular case be handed over to him. He asked me to contact Kayode Ajulo for the assignment.
I pulled a call to him and said ‘ I have successfully wrestled for you a good brief which will run to millions of naira from Segun but with a provision that you Must share with me fat per cent of the legal fee to be collected ‘
I was aghast by the pull of reaction from this Kayode Ajulo
‘ Sir, I have never done that. And I will not do it. What do you mean sir, you mean, I should share my legal fee with you. No. Egbon, forget it. I am not interested. No worthy lawyer will ever do that ‘
Please what have I done wrong?
Is it an offence for me to scout for a job for him, though he was not the one who commissioned me to do so, I just believe in his capacity to deliver and not want to share his fees with me?
Surprise! Surprise!! Surprise!!!
Is this not the same Kayode Ajulo was called to the bar in 2001 when people like us have recorded good 9 years in the journalism profession now making yanga just I got a job for him and not ready to partition his legal fee and because of that rejected the brief?
Is it not the same Kayode Ajulo who some years ago when he was working at the Abuja Sheraton Hotels and Towers prevent first-class class and an outspoken royal father from the South – West from being ridiculed by the Federal Government useless protocol officer who booked palatial suites for first-class class traditional rulers from the north and on the other hand booked just an executive room for the Imperial Majesty from the South?

Is it not the same Kayode Ajulo who ensured through a vigorous intervention that the same measure given to the royal fathers in the North was on equal measure applied to the Imperial Majesty from the South West when he was not even a lawyer?
Is it not the same Kayode Ajulo who, has a lawyer, rushed to Abuja Hospital to take a brief from a critically wounded accident victim, an act that
eventually, saved the man from untimely death?
It is the same Kayode Ajulo who I Wale Ojo – Lanre, asked him to come to a palatial mansion in Asokoro to take multi-million naira brief from a big man, but he, stupidly with humility told us to come to his office at No 21, Amazon Street, Maitaima, Abuja if we expect him to handle the case!
I even impressed upon him that he would be given the money in cash as it is about a property that has been paid for.
Do you know this boy refused to come on the basis that it is against his professional ethics or one useless rule to visit a client’s house to obtain a brief?
Don’t you think this conducts of his not only stupid but bordering n arrogance which NBA must look into?
I rest my case

END_OF_DOCUMENT_TOKEN_TO_BE_REPLACED 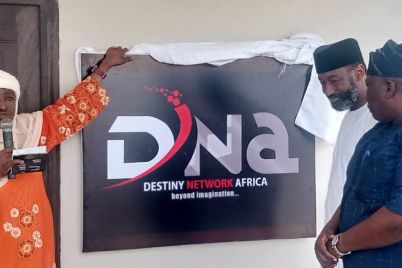 WOMEN IN MEDIA IN NIGERIA: 25YEARS AFTER BEIJING DECLARATION